A yew tree, more than 2,000 years old, tells her own story: I remember sprouting slowly from the soft Earth. From a wigwagging stem and a few leaflets she grows to a luxuriant matriarch.

“She can be pompous,” admits her creator Guido Mina di Sospiro, an Italian aristocrat who lives in Miami.

As a child, Mina di Sospiro was intrigued by the red fruit of the yew trees at his grandmother’s villa on Lake Como, north of Milan. The ancient trees, usually with hollows in their trunks, are interwoven into Western mythology — some of which shows up in his charming book, The Story of Yew (Findhorn, $19.95) which he’ll discuss at 8 tonight at Books & Books, 265 Aragon Ave., in Coral Gables.

His book takes a yew tree from birth in ancient times to today. When young, she spoke to insects and deer. After the tree’s mother died, she sank into a 30-year depression, and refused to grow. But soon she noticed the stealthy encroachment of oaks into her grove, and she learned the secrets of chemical warfare, vanquishing the invaders with toxins produced in her own body. Queen of the forest, she watched with horror as Ireland was denuded of trees, and she herself was felled, only to rise again from her underground roots.

Learning to write about, and in the voice of, a female yew took 12 years. He visited yew trees in England, Scotland and Wales. Then, he visited the Killarney Yew, a mile from the largest stand of yews left in the world. He found his heroine. 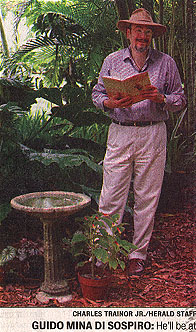 But “I had to take poetic license.” The Killarney yew is male.

Yet there was no taking scientific license. He was met with cold shoulders when asking scientists for advice. So he created a compendium of references and author’s comments. “Oh, yes,” the scientists said, reading the botanical notes and footnotes, “that’s right.”

“And then they would read the story,” he said.

Not unlike his alter ego, the ancient yew, Mina di Sospiro is familiar with the long view of history. His family, he says, goes back 1,200 years in Italy. Although he was born in Buenos Aires, he was reared in Milan. His grandmother’s villa on Lake Como is still his family’s summer retreat, and the grounds still are home to enormous trees.

“I wanted to be worthy of them, so I studied and studied,” he said. Not only did he study trees, he also studied music, literature, fencing and filmmaking. He worked for a dozen years in Los Angeles in the entertainment industry with his Spanish wife, Stenie.

In 1987, he was nearly killed in an automobile accident, but survived and won a court case. And enough money to temporarily support himself writing.

In 1989, they moved to South Florida, and found an oak-covered acre in Pinecrest where they live with their three children.

The Story of Yew, all puns intended, makes botany into a fabulous enterprise — a fable of the plant world told with courtliness and elegance. It is the history of Ireland, a commentary on human ruthlessness. Robin Hood and St. Patrick find their way into these pages.

Today, the real yew of the Killarney’s Muckross Abbey is not the biggest. . It has missing limbs and a mossy trunk.