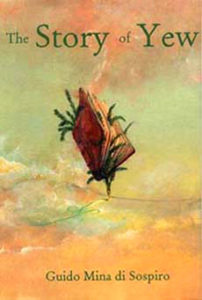 The Story of Yew is a unique account of a few millennia of world’s history as observed by… a tree! In this charming eco-fiction, somewhere between Italo Calvino and Jean Giono, the tree witnesses the coming and going of human generations, the increase and decrease of knowledge, listening and observing. Instead of a man who planted trees, here is a tree who shakes her leaves at our kind:

One beautiful morning the sun finally came out of retirement after a month of nearly uninterrupted rain, and an elegant gentleman made his way to the ruined, ivy-clad abbey. This gentleman, a foreigner, was accompanied by a rosy-cheeked little girl. I immediately felt her disarming candour and gentle heart transpire from beneath her skin, and listened carefully to the words they exchanged in their musical tongue:
“Pray tell me, Claire,” her father asked, “do trees speak? Do they remember? Do they think?”
“At night they speak to each other,” answered the little girl, aglow with smiles for her father, “and during the day too.”
“Well then, why don’t we hear them?”
“I hear them whisper ‘Sh… Sh… Sh…’”
“Then they only speak when the wind blows?”
“That’s right.”
“And when there’s no wind?”
“They sleep.”
“And what if the wind never comes, my beautiful ray of sunshine?”
“They sleep for a hundred years till it comes.”
“And why don’t they speak our language?”
“They speak their language, daddy dear.”
“And what is this magnificent yew tree telling you?”
“She’s telling me she’s lonely and that she’d like to have more company.”
Blessed little herald of truth! When I think back I can still see her, gorgeous, pure little thing, speaking such words of wisdom. In her I trace the dawning of a sense of hope, hope in the human species as a green race, a kindly race.
My hopes have been dashed, since, on repeated occasions. But at least I had proof that a human heart could nurture kind feelings… 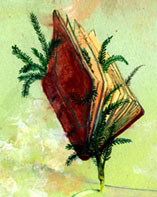 In its imaginative recounting of thousands of years of seasons changing, of death and renewal, of the slow passage of life in and around its branches, Di Sospiro’s book is clever and lyrical as well as being ecologically accurate, with a healthy bit of fantasy woven in. There are Roman conquerors resting under the tree, fairy spirits enlivening the forest, a monk who kills the last snake on the island, and a hermit who builds a treehouse in her branches. All these forms of life come and go, but the yew lives on, as the great ancient monarch of the Irish forest. The tree even falls in love.

Mere anthropomorphism, you say? A tree’s memoir as quaint as an old man’s memories? Well, think of the usual language science offers to explain how nature is actually supposed to work: organisms are machines, assembled from parts, filling an ecological niche. Nature has laws, which are unbending. Are these not just human concepts as well? Why not use the warmer metaphors of story, longing, and love?

Di Sospiro takes risks, but he offers something both experimental and inviting: a truly ecological novel. Where science must be cautious, the novelist must be bold. After her extraordinarily long life, our tree wonders where the next step for life might be:

My kind and dear friends, I ask you: What is so great about Earth, and life as we know it on Earth, to inspire some of us to export it all the way to another planet? Should we also export life’s inherent strife? Its harshness? Its ambivalence? Or rather, should it be a better place?

One in which we may do away with all the redundancies you, mother nature, have burdened us with? One in which I would not need to bear thousands and thousands of berries to see but a few seedlings, if any, grow out of them. Perhaps man would not need millions of spermatozoa to fertilize but one woman’s egg.

Why not conceive a world in which every seed turns into a tree, in which for every sperm there is one egg? Then all species would multiply and prosper lovingly, unfettered, unchallenged. An unearthly place? Yes. An unnatural place? No! Why should it be unnatural? Did it ever occur to you, mother nature, that competition and “natural” selection may well be unnatural? Why, there must be a better place, somewhere. One with no ambivalence.

Di Sospiro has taken a brilliant seed of an idea and turned it into a timeless book that will be loved for generations of readers. He has answered the challenge that the discoveries of science put forth to all artists among us: can you be inspired by all the facts we have discovered? Can you create deep and beautiful mysteries out of all the minutiae we now know?

The Story of Yew is one fine example of a literary response to ecological history. Let there be more.

David Rothenberg is a philosopher, musician, and writer. His essays have appeared in Parabola, The Nation, Wired, Whole Earth Review, Sierra, and Escape. Rothenberg’s five CDs, on which he plays clarinet, include Before the War and Bangalore Wild. His many books include Hand’s End: Technology and the Limits of Nature and Blue Cliff Record: Zen Echoes. He is an associate professor of philosophy at the New Jersey Institute of Technology.