A mystical love triangle between a young woman, a lover, and the Beloved.

Inspired by Attar’s  The Parliament of the Birds, yet set in the contemporary world of pop music. A tale about the effects of prayer, dreams, music, love, discovery, healing, and… synchronicity. 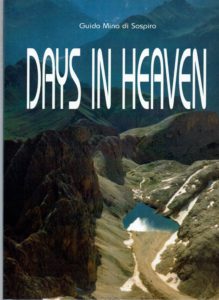 A contemporary story of love and of spontaneous healing. Joan knows only two things about her infancy: she was born at Woodstock, during the famous music festival; and her mother, having fled to India, left her behind to be put up for adoption when she was two. Despite her shaky beginnings, Joan turns out to be somewhat of a child prodigy. While still in college, she makes great strides in New York’s music business as a radio DJ and as a rock critic. On staff at a popular music magazine, at only twenty-five, her publisher promotes her to the rank of Features Editor, and sends her abroad on a special assignment—a series of articles on the “Rock Capitals of Europe”. Once there, her business trip turns into a journey of self-discovery. Despite her matter-of-fact approach to life, her single-minded emphasis on her career, and her wry humor, chance events and the meeting with a person she could never have imagined existed broaden her horizons “precipitately”. Such events—the unraveling of a mystery—force her to forgo her calculating rationality and heed her impulses instead. Back in New York, the same, recurrent haunting dreams of a lifetime and the fulfilling of her secret wish for self-sacrifice compel her to return to Europe, there to meet with her destiny. Such a destiny will manifest itself in a twofold way. First, in the guise of a “symmetrical” healing process—remission from malignant lymphoma. Second, she will at length reunite with her forsaken—but innate—divinity, and fall in love at last with a charming singer-songwriter from Ireland. A present-day personification of a troubadour (and, as the tale will make manifest, an unwitting agent to a loftier design than merely his own), he had been singing her praises—quite literally—all over Europe, with little success but undaunted gallantry.

The plot is possessed of a number of unforeseen twists which, if revealed here, would spoil one’s reading experience. The novel is set in New York and Europe, chiefly in Dublin, London, Paris, the Italian Riviera, Rome and the Alps.

Days in Heaven is refreshingly grounded in popular culture, specifically pop music, as the two main characters are a rock critic and a singer-songwriter. Such a realistic springboard allows the novel to be appreciated also by readers of a skeptical nature.

Lastly, Love and Music—the other great passion in my life—are the narrative’s great orchestrators. “If music be the food of love,” as Shakespeare tells us in Twelfth Night, “play on.”

I found Days in Heaven an engaging story and much enjoyed reading it. The characters are intriguing, attractive and well drawn. The evocation of the different places it is set in is good and the story very interesting. I congratulate you on this piece of writing, which covers so much territory in such a short span.
—Rupert Sheldrake

I like the sound and feel of your novel, which I enjoyed. I particularly enjoyed the mountain passages, the Dublin parts and Jimmi’s marvelous persistence in wooing his lady. I enjoyed the plot, and the transfer of the illness was delicately done, and Joan’s recovery too.
—Mike Scott, bard and founder of The Waterboys

Days in Heaven is born with a congenital soundtrack. The songs below are either sung, heard, discussed or alluded to in the novel itself.

Quizzes on DAYS IN HEAVEN

1. Why would God be able to hear only wordless prayers?

2. How could a dog’s sense of smell be as conclusive as DNA testing

3. What is the connection between a Sufi poet, a troubadour, and a contemporary singer-songwriter from Ireland?

4. What does it mean, to heal vicariously?

5. Why would an ancient Roman emperor, who was also a philosopher, say: “Live each day as though your last”?

6. How can a 7-cent guitar pick be the turning point in the heroine’s life, and the catalyst to a whole chain of events?

7. Why would a painter exhibit her work in a dark, damp and inaccessible cave high up in the mountains?

8. If dreams are self-fabricated, how could the heroine dream of things she does not know, yet actually exist?

9. What is love from afar? And, how can it thrive on absence?

Quotations from DAYS IN HEAVEN

“There’s only one advantage about serenading a lady in the rain. Should she throw a pailful of water at me, I wouldn’t know the difference.”

What he did realize was that the train was gliding across Provence, the ancient troubadours’ original stamping ground. His urge to sing and play was stronger than ever, and unstoppable.

It seemed as if this unsought and blurred memory attempted to remind her of a similar state of powerlessness she had succumbed to many, many years earlier, perhaps even before, or rather shortlybefore, she was born.

But if one doesn’t cry out one’s helplessness, how’s anyone to hear?

The one thing she was beginning to realize was that one should not ask in words of what may as well lie before words.

You’ve been with me all along. I left you with pieces of your soul sewn to my heart. This may explain why it aches so much–the stitching, you see, was a bit hasty.

The night is for love. Let other people sleep through the night and wreck their relationships during the day. If you were here with me, I wouldn’t, couldn’t sleep. In your absence, I’m equally sleepless. Then perhaps you are here, as a presence. So I stay up. These moments are all I have.

Every day I become more myself. I am now exactly what I am in every respect.

What will happen next, no one can tell, but one thing I know: every string I’ll pick, every chord I’ll strum, every word I’ll sing, I’ll be thinking of you.

In a flash, she could clearly perceive the strange events of her life since her first trip to Europe as many steps leading her ultimately to this place high amid the clouds.

More than visible, I am participable.