Memoirs of a River

I wasn’t expecting time. None of us were. Nothing used to last, so we knew neither beginning nor end. Yet time happened, and I began. 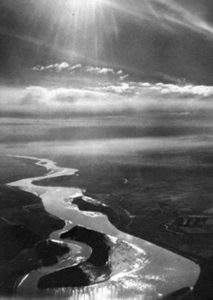 This is a book of many strata, each of which will delight its appropriate reader. At the deepest level, a certain readership will appreciate the pervasive presence of esotericism and the sophia perennis. They will spot the echoes of Plato’s erotic metaphysics; Porphyry’s Cave of the Nymphs; Paracelsus’s Elementals; Pythagoras’s Harmony of the Spheres; medieval treatises on angel magic and alchemy. None of this, however, weighs on the narrative, which is a jocus severus, a “serious jest” in the same ironic, playful style as The Story of Yew. One reads captivated by the surface, then at the end realizes that one has been touched by something profound.

—Joscelyn Godwin, author of Harmonies of Heaven and Earth, The Pagan Dream of the Renaissance, etc.

The “fictional-yet-historical” memoirs of a mighty river, in which our world is presented from a fresh perspective and celebrated in all its loveliness, before the harsh realities of the industrial age. To my knowledge, no other author has ever attempted to have a river tell its eon-old story, although innumerable books have been written about rivers.

If you took history, fantasy, and natural history; added a feminine approach and an ecological mindfulness, you would have an approximation of Memoirs of a River. But there is more. The challenge lay in giving voice to an entity so very different from humans, or even animals or plants. A mighty river is an immense body of water, extending from the clouds to its underground streams; from the source, up in the mountains, to its labyrinthine delta by the sea. It is exceptionally different from other living organisms in that, for one thing, it does not eat. Humans and animals alike process food into energy. Plants photosynthesize the sun and turn it into energy. A river does none of the above. How is it alive, then? Or, is it alive at all?

Much of the narrative is entrusted to beings other than human. Gnomes and “gnomesses”; nymphs; angels, and all sorts of deities, minor and major, tell their stories for the river to echo. The river itself is spectator and participant of an all-inclusive tale. Thanks to this reversal of standpoint, our civilization is seen from an “alien” perspective. And yet, there is a strong connection with the factual reality of the geographical place. All the flora; fauna; geology; and hydrography involved is accurate. And so are the main historical events depicted, such as the Romans, the Huns, the Renaissance, with special appearances by: Attila of the Huns; Charlemagne; Leonardo da Vinci and Botticelli; Napoleon; Mussolini and Hitler. And the mythology employed has a direct link with the place. Not by chance are the gods who partake of the narrative of Greco-Roman stock. The gnomes, undines and sylphs belong to a later mythology, which was developed underground, so to speak, in mediaeval and Renaissance Europe alongside the official doctrine of the church.

The novel hinges on a thick and thickening plot. Many characters drop in and out of the tale and, all together, participate in a grand finale. Love stories of all descriptions abound, and, unlikely though this may seem with a river as the hero, much dialogue keeps the narrative flowing swiftly and uncomplicatedly.

The tone throughout is serene and witty. When the horrors of WW II—with Hitler’s atrocities and the atomic bomb above them all—make it all too clear that the river’s existence can no longer be dreamlike, the river does what every other god and goddess has already done. Yet, its hope in an “infinitely sweeter” era to come does not die. Such an era is heralded by the daughter of the novel’s heroine, the nymph Salmacis.